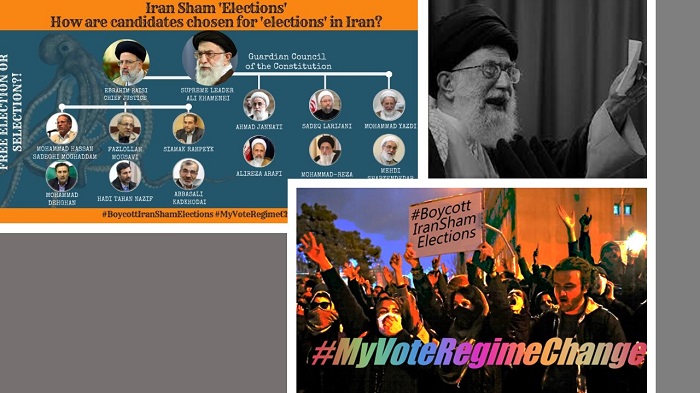 The National Council of Resistance of Iran (NCRI), and the People’s Mujahedin of Iran (PMOI / MEK Iran), reported that the former regime president Hassan Rouhani revealed in his monthly cabinet meeting on Wednesday that the Iranian people mostly ignored and boycotted the regime’s presidential election on June 18.

It’s no secret that the regime’s elections are staged, with carefully chosen candidates who are totally committed to the mullahs’ rule as the regime’s supreme leader. However, the administration must stage the electoral farce in order to maintain a democratic facade.

Rouhani, who held numerous significant security positions before becoming the regime’s president in 2013, knows the importance of the elections from both a security and a political standpoint. On the eve of the election, he was among the senior regime officials who called people to vote.

Rouhani expressed concern about low voter attendance and the impact it could have on the regime during a cabinet meeting. Rouhani went on to say that the issue is even more troubling because the exceptionally low turnout occurred despite regime supreme leader Ali Khamenei urging people to vote.

The administration knew quite well that the people would not vote in the elections. However, the low morale inside the regime’s ranks has aggravated the issue. Even the regime’s loyalist base, which accounts for fewer than 4% of the population, was not inspired to vote, according to numerous reports.

“We have so many concerns that we don’t even have the strength to vote and we were left behind,” says an open letter written by a regime loyalist to the regime’s new president, Ebrahim Raisi, and published in multiple state-run channels.

Rouhani implied that the Guardian Council, which oversees elections and vets candidates for their loyalty to the government and qualification to compete for official positions, was to blame for the low voter turnout.

Rouhani said that the low voter participation was due to the way the candidates were placed, implying that if more candidates from the so-called “reformist” faction ran, there would be a better likelihood of a high voter turnout.

People all around Iran made it plain prior to the election and on election day that they do not believe their issues would be solved by electing a criminal and murderer from among the many who run the system.

Meanwhile, at open-mic sessions hosted by the regime in several towns to promote the elections and encourage people to vote, a number of brave individuals bravely stepped to the microphone to declare their disdain for the regime and all of its presidential candidates.

A man asked, “Why should I vote?” “So a thief among thieves goes up there and sits?” To cast a ballot for a group of people who vet, qualify, and disqualify one another? Should I vote for this ostensibly formal appointment?

This is just an example of the people’s complete disdain for the governing mullahs. In view of the nationwide election boycott, Rouhani is correct to be concerned about the regime’s future. Rouhani fails, however, when he claims that it may have gone differently if there had been other candidates.