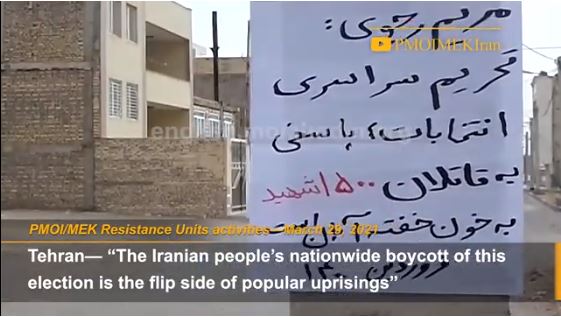 As voting for the sham presidential election would have been “betraying the blood of 1500 martyrs in Iran protests” in November 2019, the majority of people boycotted that.

The November 2019 major protest in Iran occurred one day after the government raised the price of gasoline. Protests spread swiftly around the country, and the Iranian leadership shut down the internet to make it easier to control the people without any news coverage.

“During the first days of the protests, news indicated people attacking governmental centers. Then came the news about security forces who opened fire on protesters leaving some deaths and wounded.

Cities of Behbahan and Mahshahr in Khuzestan province were in the spotlight,” in November 2020, the state-run Hamdeli daily published an article.

Hamdeli then highlighted how many other cities, including the capital, Tehran, had been added to the list of rising cities on a daily basis. “In Mashhad and Ahvaz, cell phone internet bandwidth has been reduced.

By order of the National Security Council, the entire country’s internet connection was blacked off at the same time. To suppress the disturbance, security officials ordered the closure of schools and universities. In some situations, the task was followed by the shutdown of several metro stations.”

The People’s Mujahedin of Iran (PMOI / MEK Iran), reported from within Iran that the authorities killed over 1500 protestors during the November 2019 uprising.

The statistic was later confirmed by Reuters, and the (PMOI / MEK Iran) figure was echoed in Iranian people’s slogans during demonstrations in Iran.

As Hamdeli agreed, the Iranian people have been suffering for years under this government, and they will never forget or forgive the leaders.

Executions in the 1980s, including the 1988 massacre, as well as harsh oppressions of an uprising and protests in Iran throughout the past four decades, including the most recent in November 2019, will not be forgotten.

These harsh tactics have turned Iran’s society into a ticking time bomb that will blow shortly.

Ali Khamenei, the regime’s Supreme Leader, has chosen Ebrahim Raisi as the nearly ensured next president. Raisi was the massacre’s henchman in 1988.

After the sham presidential election in June 2009, Khamenei realized that any disruption during the election may easily lead to an uprising.

Ebrahim Raisi has a hand in the blood of the general public, in addition to the 1988 massacre.

Raisi, according to France 24 on June 15, played a crucial role in the deaths of thousands of opposition detainees.

“Last year, seven special UN rapporteurs told the Iranian government that ‘the situation may amount to crimes against humanity and urged an international probe if Tehran did not show full accountability.”

In a 2018 report, Amnesty International made the same observation, identifying Raisi as a member of the Tehran “death commission,” which covertly transported thousands to their deaths in Evin prison in Tehran and Gohardasht prison in Karaj.

However, Khamenei’s approach of centralizing power in his dictatorship will fail because the regime has no response to Iran’s economic and social crises other than oppressing the people. These will intensify people’s anger of the regime and lead to another uprising.