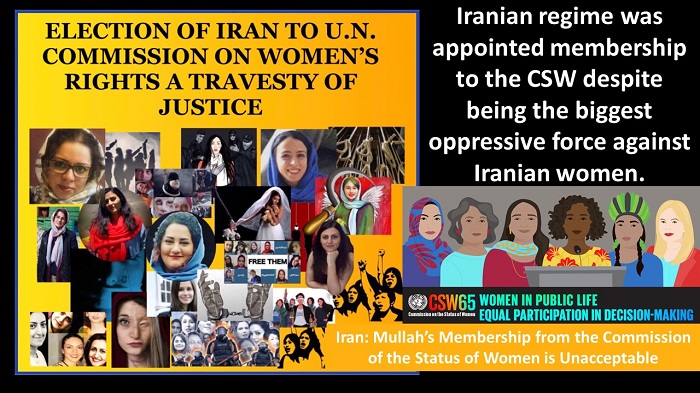 The Commission of the Status of Women (CSW) 65th session was held on 19 April. Here the Iranian regime was appointed membership to the CSW despite being the biggest oppressive force against Iranian women. It will be a member for a four-year term from 2022-2026.

The membership of the mullahs misogynous, religious, fascism in the UN CSW flagrantly contradicts the philosophy of the UN. It allows the regime to continue its suppression and marginalization with indemnity.

The regime’s misogynistic laws and constitutions couple with its violent attitude towards women demonstrate this unsuitability for the membership. They are barely qualified to be present at the UN, let alone the CSW.

Historically, the regime has suppressed its women for more than four decades. The UN Special Rapporteur on Human Rights in Iran notes how the regime considers women’s second-class citizens.

They are the world leader in the execution of women. For near ten years, the regime has not passed a single bill to prevent violence against women and provide them legal and social protection.

Experts have acknowledged the regime holds the world record for domestic violence against women.

The World Economic Forum’s Global Gender Gap Report 2021 ranks Iran 150 among 156 countries with an index of 0.582. The ranking is 2 steps down compared with last year and 8 steps compared to 2019.

Iran is among “the countries with the largest economic gender gaps.” The clerical regime in Iran scores 0.375 on Economic Participation and Opportunity and a minuscule 0.036 on women’s political empowerment.

Iran also sits amongst the countries with the lowest female participation in parliament with 5.6%.

The Women’s Committee of the National Council of Resistance of Iran (NCRI) has denounced the CSW membership, saying including the misogynistic religious fascism of the mullahs is continuing to suppress Iranian women. The NCRI Women’s Committee implores international condemnation of this membership.

Despite the CSW’s decision, Iranian people and Iranian women, in particular, have pledged to boycott the regime’s sham elections.

The past year has seen the regime weaponize the effects of the Covid-19 pandemic to prevent public organizations or demonstrations, however since the turn of the New Persian Year, there has been a successive outburst of dissent. These protests have escalated with Iranian women at the forefront.

This includes the protests by Iranian pensioners and retirees. Retired women participated in around 130 protests. Women also joined the protests by teachers, nurses, farmers, and others, with Iranian women’s participation registered at 151 protests. There were, of course, arrests and imprisonments, however.

Iranian women have been at the forefront of the protests of Iranian teachers. A woman from Hashtgerd spoke, at the gathering of recent teaching graduates in Karaj on 19 April and made a call to action for protestors to take back these rights. For this, she was arrested and detained for 24 hours.

In the stock market protests, women in Tehran have led the ranks of defrauded investors with chants of “We won’t live under oppression; we will give our lives to live free.”

Iranian women continue to play an important role in the protests of cross-class Iranian peoples, from doctors, nurses, political activities to families of political prisoners. These protests are symptomatic of the Iranian people’s irreconcilable conflict with their corrupt, kleptocratic, and repressive regime.