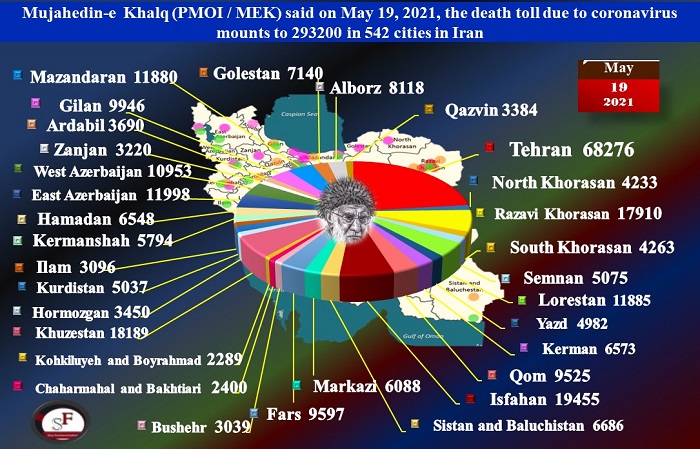 The National Council of Resistance of Iran (NCRI), and the People’s Mujahedin of Iran (PMOI / MEK Iran), reported that the coronavirus death toll in 542 cities surpasses 293,200. As the death toll from Covid-19 rises, state media recognize the regime’s cruel policies that have contributed to this crisis and warn of widespread revolts.

“Amid the country’s crises, beyond officials’ arguments, and as we approach the critical and decisive days of [sham elections] on behalf of people whose cries are lost in the uproar of events, we warn about the most important and vital issue of life these days,” the state-run Sharq daily wrote on Monday. The government agencies’ first mission should be to provide and distribute vaccines.”

Since the beginning of the outbreak, the Iranian regime has pursued an inhumane Covid-19 program. Officials from the regime have tried to downplay the situation, and the ayatollahs’ Supreme Leader Ali Khamenei banned American and European vaccines from entering the country in January 2021. Khamenei and his government have been attempting to monitor Iran’s restive society by using the deadly virus as a political tool.

“Some governments are accused of using coronavirus. Governments and regimes are using the Covid-19 outbreak to cover up their weakness and inefficiency, and by creating fear, worriedness, and limitations for people, make opportunities for themselves,” the Etemad daily reported on Sunday, implying that the regime’s barbaric Covid-19 policy is justified.

Although several countries are taking significant measures to vaccinate their citizens and some are maintaining lockdowns, the mullahs’ regime requires people to work and attend school and has yet to implement a successful vaccination program.

“News of the disappearance of several vaccine shipments in the country, as well as contradictory remarks from Ministry of Health officials, has raised doubts about mass vaccination in the shortest time possible,” the state-run Arman daily reported on Sunday.

“The National Covid-19 Task Force has ordered schools to hold the final exams in person, despite the protests of students and their families continue in different parts of the country,” Arman daily adds, referring to recent student protests in Iran against in-person exams.

“The country’s Covid-19 management has been unstable,” Arman writes daily, “Officials have made sudden and contradictory decisions that have only perplexed citizens and decreased public sensitivity to the crisis.”

“Covid-19 outbreak revealed [the regime’s] weaknesses. We saw that in our country where the price of a mobile phone is the same as the price of a Pride car ten years ago. Therefore, millions of students are deprived of online education.

People should either steal or become street peddlers to survive and feed themselves on the days when they have lost their honorable jobs,” Arman daily published in another piece on Sunday.

The regime’s inhumane Covid-19 program has increased society’s explosiveness, according to Arman daily.

“Economic problems, inflation, and the fear of death and disease have drastically reduced people’s patience. People commute in the city like moving powder kegs that could explode at any moment,” Arman warned daily.

The regime’s inhumane Covid-19 scheme has failed. The ongoing demonstrations in Iran also show that Khamenei and his regime have struggled to suppress the country’s explosiveness. As a result, another national uprising is unavoidable, according to state media.