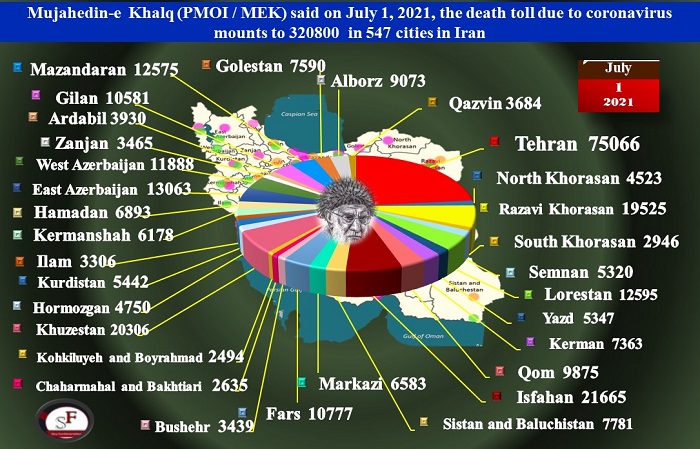 On Monday, Iran’s Health Ministry released faked figures showing that 142 people died as a result of the coronavirus, bringing the total death toll to 83,985. Since the Indian and South African variants are circulating in the southern regions of the country, regime authorities have recently conceded that Iran will face the fifth Covid-19 wave due to the delayed immunization process of the locally manufactured vaccine.

“We will have a fifth peak with the Indian or delta variant if we delay in taking necessary measures. Our southern provinces, of course, will be designated as red zones. The potential that the Indian form has spread throughout the country must be considered.

According to the Mizan news agency, which is affiliated with the regime’s judiciary, Alireza Naji, the head of the Beheshti University Research Center, remarked on Thursday that “we are facing a scenario like the fourth peak with the UK variant.”

The National Council of Resistance of Iran (NCRI), and the People’s Mujahedin of Iran (PMOI / MEK Iran) over 320,800 people have perished as a result of the Covid-19 outbreak as of Monday, June 28, 2021, based on reports from their network in Iran.

While the death toll from Covid-19 is steadily rising, the immunization process is moving slowly. Only 5.7 percent of Iran’s population has received vaccinations so far.

The supreme leader of the Iranian regime, Ali Khamenei, banned reliable Covid-19 vaccinations from the United States and Europe on January 8, 2021. The Iranian dictatorship now utilizes the so-called local “COVIran Barakat” vaccine, which has not been approved by the World Health Organization and is being questioned by the regime’s health professionals.

“Issuing vaccine approval without successfully completing the third phase of testing is dangerous and unprecedented. The public should be informed about the decision-making process, reasoning, and all measures involved.

According to the state-run Hamshahri daily on Thursday, a deputy health minister wrote to the health minister, “We must strongly refrain from creating confusion for the people regarding the effectiveness of vaccines that have not gone through the scientific authorization process.”

To control the Iranian society, the regime implemented a brutal Covid-19 policy based on inaction, deception, and plunder. Khamenei has restricted vaccines from entering the country because he wants to exploit the deadly virus and its rising death toll as a discouragement to major protests.

In addition, Khamenei and other regime officials insist on creating domestic vaccines since it profits them. The Execution of Imam Khomeini’s Order (EIKO), a financial agency controlled by Khamenei, is in charge of the regime’s so-called “domestic” vaccine production and distribution.

“The Iranian vaccine is seven or eight dollars. If we calculate it at the current exchange rate [on Saturday] at 24,500 tomans, each dose of the vaccine is 196,000 tomans.

A family of four to receive two doses of the vaccine should pay one and a half million tomans [around $59],” on Sunday, the state-run Arman newspaper published an article.

In an essence, the regime is to blame for Iran’s growing death toll. The dictatorship is taking advantage of the Covid-19 outbreak, which Khamenei has described as a “blessing” and “test” for his rule.

The government, however, has failed, as evidenced by the recent widespread boycott of the dictatorship’s fake election and demonstrations by people from all walks of life. The regime’s cruel Covid-19 policy has aroused public opinion against it, and the mullahs will face the Iranian restive society.