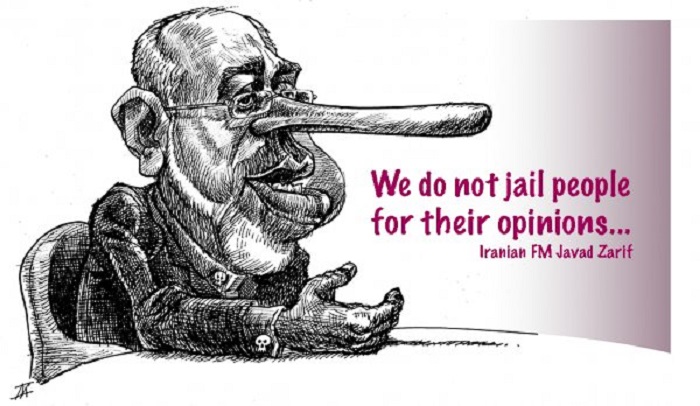 Soleimani’s death was categorized by an outpouring of regime propaganda, portraying the notorious terrorist as a popular figure. The entire “reformist” faction contributed to the propaganda drive, including Zarif and President Rouhani.

Zarif’s comments outline the ‘differences’ in factions of the regime to be merely performative to lull foreign advisories into a false sense of security by mitigating ‘hardline’ threats from ‘hardline’ officials by offering concessions to those supposedly “moderate” officials.

A broad selection of the Iranian population endorsed this sentiment during nationwide protests in 2018 and November 2019. The protest slogans were provocative and anti-government, one of which identified both political factions by name and declared “the game is over.”

This speaks to the fact that the uprisings represent popular demand for a new system of government along the lines of the democratic system illustrated by the National Council of Resistance of Iran (NCRI).

In the wake of these uprisings and with the sham presidential election on the horizon, it can be observed that Zarif is trying to play up the supposed difference between “reformist” factions and ‘hardline factions’ associated with Khamenei, the IRGC, and Soleimani. If those differences are perceived to be legitimate, it could encourage foreign powers to reach out to the ‘moderate’ faction.

The leaked audio however effectively confirms that Zarif has little role in setting Iranian foreign policy while he was the nominal head of the Foreign Ministry. “My diplomacy always paid the price for the military activities of the Martyr Qasem Soleimani, and it was not vice versa,” he said at one point in his three-hour interview.

This excerpt implies the two men’s foreign policies were at odds whilst also recognizing that it was the hardline faction that set the policy for the regime as a whole. In previous statements Zarif was more transparent about this, “Our foreign policy is under the authority of the Imam,” he once said about the supreme leader. “And the state’s general policies regarding foreign affairs are determined by him.”

It would have made no sense to insist the two factions were really the same if Zarif had aimed to avoid the wrath of hardline factions that truly opposed his plan. The claims would have never been taken seriously if the IRGC did not already note Zarif’s fealty to the regime.

Further to this, such statements would have undermined Zarif’s efforts to promote his agenda as an alternative to the hardline strategy of force and international threats. Zarif consistently employs a rhetorical device, in complaining about Soleimani’s militarism overshadowing Foreign Ministry’s diplomacy, to domestic issues to explain the lack of progress towards reform even after eight years of Rhouhani’s administration.

Reformists have utilized the same arguments to assert their powerlessness to free Western hostages, expand the rights of women and lift digital restrictions while continuing to pursue the regime’s malignant activities. Zarif now asserts that his faction is equally powerless to effect change and a less confrontational foreign policy. European and American policymakers should question the value of outreach to “moderate factions” if they acknowledge the ‘hardline’ factions to have all the power.