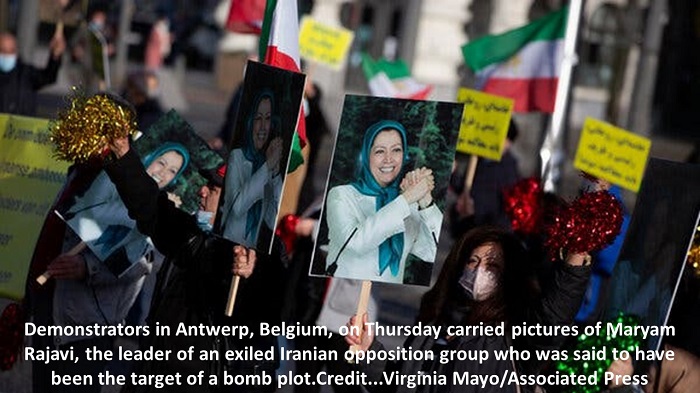 Convicted terrorist-diplomat Assadollah Assadi’s lawyer announced on Wednesday that no appeal would be handed down by a Belgian court in February. The former third counselor at the Iranian embassy in Vienna had not previously participated in his trial or sentencing. He had responded to initial investigations by insinuating that if his case were not dropped, Iranian-backed terrorists may focus new attacks on the Western world.

Assadi’s pending 20-year sentence is from the attempted bombing of the National Council of Resistance of Iran’s (NCRI) gathering near Paris in June 2018. He masterminded the plot as well as logistically managing the three other operatives. Assadi flew the explosives in a diplomatic pouch on a commercial flight from Tehran before passing it to co-conspirators in Luxembourg, tasked with getting it as close as possible to the President of the NCRI, Maryam Rajavi.

Maryam Rajavi responded on Twitter to the confirmation of Assadi’s sentence saying, “It is more important [now] for the EU to blacklist the regime’s Ministry of Intelligence and the Revolutionary Guards and prosecute and expel its agents and mercenaries.”

This recommendation is in response to the perception that Assadi’s activities are symptomatic of a larger phenomenon in Iranian diplomatic infrastructure. This was clarified in Assadi’s trial where prosecutors repeatedly emphasized that he did not work alone, but at the behest of authorities in the clerical regime.

Before and after the trial, the NCRI has attributed the plan to the Supreme National Security Council. The function of this council was noted by President Rouhani to be a part of an “exact system and framework” for collaborative decision-making in foreign policy.

Rouhani explains: “The SNSC was set up to allow the heads of the three branches to be present and the military and the government branches to come together.” He adds, “Military commanders and political officials are there. We discuss, and finally, the Supreme Leader must approve our decision, so we have no problems.”

These remarks on 28 April were prompted by the leak of the recording of foreign Minister Zarif highlighting tensions between the so-called ‘moderate’ and ‘hardline’ factions. The recording also highlighted how close those factions are and how often they overlap on matters of Tehran’s paramilitary and diplomatic institutions.

Zarif acknowledges that many ambassadors have a background in security, including Islamic Revolutionary Guard Corps members of operatives for the ministry of intelligence.

Rajavi is calling attention to this however by imploring European policymakers to extend terrorist designation to such bodies and scrutinize Iranian diplomatic missions and other institutions in the west, for possible infiltration.

Numerous Iranian officials have been implicated in such a practice over the years. Assadi is not a lone case in Europe, however, is the first to be prosecuted. His case represents a challenge to Tehran’s impunity but is no means sufficient to remove the impunity completely.

This can be seen in the regime’s initial response to the Assadi case and that authorities are now arguing that he is owed diplomatic immunity. They are contending that the Belgian prosecution violates international law regardless of Assadi’s actions.

This argument is trivial but cannot be dismissed. Tehran’s protests have to be strong and clearly rejected so that no one can raise these issues again in defense of an obvious instance of state-sponsored terrorism.