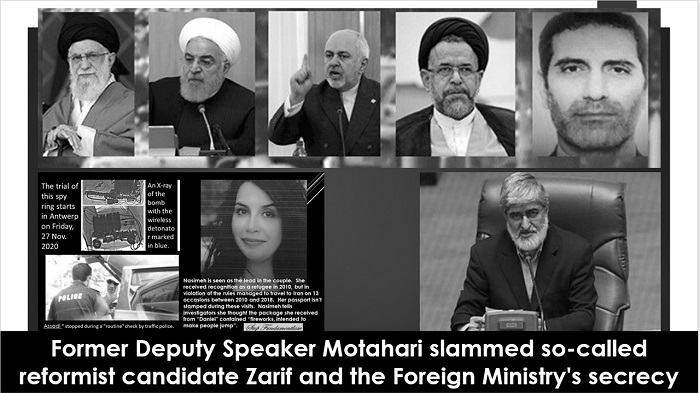 Zarif confirms in the interview that the mullah’s foreign policy is justifying the regime’s terrorism. Zarif endeavored to blame Qassam Soleimani, the late terror-mastermind who was killed in a US drone strike in January 2020.

Soleimani was notorious for commanding the Islamic Revolutionary Guard Corps (IRGC) Quds force. He had previously overshadowed Javad Zarif in foreign policy matters. This was seen in Zarif’s exclusion from talks with the Iranian-backed Syrian dictator, Bashar Al-Assad.

The interview confirms the regime’s export of terrorism has been the ruling theocracy’s primary course of foreign policy decisions. Zarif endeavored to pass the blame on Soleimani, saying that military focus had gotten in the way of diplomacy. Many of Zarif’s earlier statements suggest otherwise, however. In a 2019 speech whilst on a visit to the IRGC’s headquarters, he proclaimed that he and Soleimani had strategic discussions on a weekly basis and had no differences.

Days after the interview leaked, such an account of diplomatic-military cooperation was backed up and expatiated on by President Rouhani. Rouhani praised the clerical regime’s “exact system and framework” in a cabinet meeting on Wednesday, saying the system helped collaborative decision-making for foreign policy, military to paramilitary operations.  He spoke about the Supreme National Security Council (comprising the regime’s top officials), “The SNSC was set up to allow the heads of the three branches to be present and the military and the government branches to come together.” Any decision of the SNSC however, is subject to the approval of Khamenei.

Zarif’s leaked comments demonstrate the lack of any real separation between “hardliners” and “reformists” in the regime, which has long been rejected by the Iranian Resistance over the last 40 years.

Regardless of Rouhani’s praise for the SNSC and it’s uplifting and framework that supposedly gives voices to people throughout the regime, it is clear that the regime speaks with one voice-Khamenei’s. They must all swear allegiance to the supreme leader as a precondition for running for office.

The most substantial difference between the “hardliners” and the “reformists” is that Zarif’s recent complaints are part of the effort to facilitate the regime’s most provocative activities whilst simultaneously avoiding personal blame or responsibility.

Through entities like the SNS, officials had full awareness and input regarding crackdowns on dissenters to violent intervention defending the Assad regime, to the attempt to perpetrate terrorism in the West.

Khamenei attributed the growth of the Iranian Resistance to the increased protests, spanning more than 100 cities. They have also helped popularise slogans against both factions of Iranian politics and demand regime change.

In the wake of recently thwarted terror plots, The National Council of Resistance of Iran (NCRI), and the People’s Mujahedin of Iran (PMOI / MEK Iran) emphasized the involvement of the SNSC, Rouhani, and Khamenei.

The Belgian trial of the operatives in the Paris plot confirmed how high up the chain of command the operation originated when it was run through the Vienna embassy.

It is unreasonable to think Zarid unaware of such planning among his own diplomats and would not avoid taking responsibility. However, with Zarif and Rouhani’s explicit remarks it is obvious that they were aware of all the malignant terrorist activities of their regime.